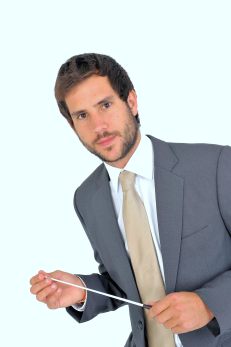 Chris started playing Trombone in 1996 at the age of 10 with his local brass band in Tavistock, Devon. In 2004 he won the Classic FM Two Moors Young Musician Competition and in the same year was offered a place at Cardiff University to study Music. Whilst at Cardiff, Chris played for one of the best brass bands in the country – The BTM Band with whom he had numerous major contesting successes under the baton of Jason Katsikaris. Chris graduated with Honours in 2007 and returned home to Devon to pursue his music career. Since then he has held conducting positions with the Saltash, Soundhouse and St Pinnock bands – enjoying many contesting successes along the way

He currently works as a private brass tutor in schools around Devon and Cornwall as well as working for Plymouth Youth Music Service. He also plays Bass Trombone for the Dave Hankin Big Band and forms one fifth of folk/ska band The Normals.